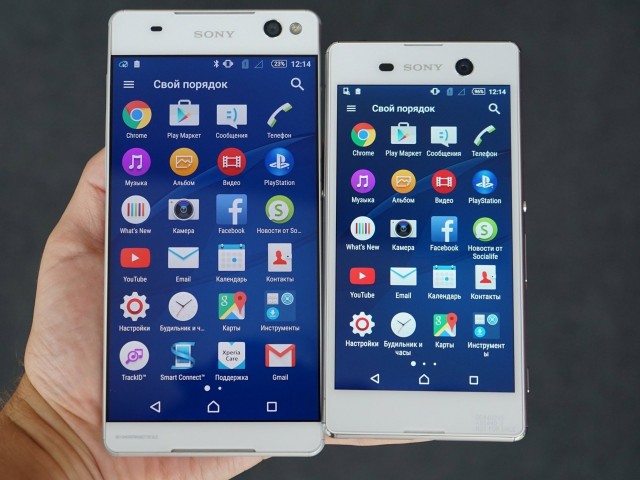 It’s the peak time of the year when renowned smartphone makers launch new smartphones in mid and high-range market. After Samsung’s Galaxy Note 5 and S6 Edge Plus, the Japanese tech-giant Sony has also made a move with a slew of smartphones. The company first launched its two mid-range beauties Xperia M5 and C5 Ultra, and then pumped up the tone with the launch of its latest flagships Xperia Z5, Z5 Compact and Z5 Premium. In last few days, we’ve seen a lot of Xperia Z5 including the one boasting the new 4k UHD display. But in this article, we’ll be taking the other two members of Xperia family to see which one comes up as the best mid-range smartphone.

Our comparison between Xperia M5 and C5 Ultra highlights major positives and negatives of both phones. It reveals some major elements, and gives an appropriate reason for selecting or not selecting any smartphone. Have a look to know more.

In terms of size, Xperia M5 and C5 Ultra look completely different. Packed in a metal frame, they both feature glass on the back and highlight essence of Sony’s OmniBalance Design concept from all angles. The frame of both smartphones protrudes over glass and adds an added layer of protection from unexpected accidents. And, IP68 certification on Xperia M5 further extends the level of protection by offering resistance against dust and water.

In our opinion, both phones are fairly well built but Xperia C5 Ultra feels pretty hefty at 187 grams. Although it boasts a bezel-less design, its bulky form-factor can create some troubles for buyers with small hands. Xperia M5, on the other side, is ideally sized and weighs around a decent 142 grams.

Like always, visual experience from Sony continues to get better with new smartphones coming in. With the launch Xperia M5 and C5 Ultra, the company has introduced a crafty bezel-less display producing crisp and vivid colors. While C5 Ultra features that giant 6-inch bezel-less display, Xperia M5 flaunts a classy with a standard 5-inch screen. They both boast the same pixel resolution of 1080 x 1920 pixels, and come protected with scratch-resistant glass as well. However, the screen of Xperia M5 looks denser with 441 pixels per inch, while C5 Ultra lags behind with a lower pixel density. The bigger sibling supports multi-touch up to 10 fingers, and is also equipped with Sony Mobile BRAVIA Engine 2.

As for performance, both handsets pack immense power with MediaTek chipsets under the hood. Xperia C5 Ultra powers up by MediaTek MT6752 with eight cortex A-53 cores clocked at 1.7GHz, coupled with Mali-T760MP2 and 2GB RAM. It performs very well, but compared Xperia M5 housing MediaTek Helio X10 processor paired with 3GB RAM, it still looks quite weak. The faster processor and additional 1GB RAM is a major advantage with Xperia M5.

The new Xperia M5 and C5 Ultra both run Android 5.0 Lollipop with Sony’s custom interface. The two devices go head to head on the software front, and pack a clean and bloat-free interface. Sony has not introduced major changes in its UI, and is going with the same interface enriched with a bunch of apps like Music, Movies, and others. Tacky animations are also not showcased in either of the two handsets.

Xperia M5 packs a 21.5-megapixel rear and 13-megapixel front-facing shooter and features a perfect ecosystem for photography. The selfie-focused handset delivers great images in lowlight conditions, and outshines other mid-range phones right away. The main camera of Xperia M5 stretches up to a maximum resolution of 5248 x 3936 pixels, and offers support for capturing 4k videos at 30 frames per second.

The selfie-focused Xperia C5 Ultra, on the other hand, boasts a 13-megapixel sensor with its rear and front-facing snapper. It clicks ideal snaps up to a maximum resolution of 4128 x 3096 pixels, and packs a bunch of features such as, touch-focus, panorama, HDR, face-detection, and geo-tagging. The front-facing snapper of this device is enriched by an additional LED flash, but the downside is, video capturing capabilities are restricted up to a maximum 1080p at 30fps.

In terms of storage, there is nothing to compare here. Both handsets offer sufficient room for work and play, and boast 16GB of inbuilt storage, expandable up to a whooping 200GB. Well, expansion up to 200GB certainly looks more than enough. But, some heavy users might feel interested in getting to that mark by keeping a massive selection of games, movies, and music videos.

Even on the connectivity front, there is nothing to compare between Xperia M5 and C5 Ultra. Launched at the same date, the power-packed duo offers decent support with a bunch options. They pack traditional connectivity options, and offer glitch-free browsing experience with advanced Cat.4 LTE connectivity. They support LTE bands currently deployed in India, and come in dual-SIM avatars as well.

Both handsets deliver decent performance with their respective non-removable batteries. While Xperia M5 packs adequate support with a 2600mAh battery, its sibling powers up by a bigger 2930mAh battery. On paper, the battery of C5 Ultra looks stronger, but the 6-inch full-HD display of the device gobbles more power, and minimizes the difference to some extent. In a nutshell, both phones hold sufficient amount charge, and can easily keep you connected throughout the day.

As expected, Sony has launched Xperia M5 and C5 Ultra at hefty price tags. This time around, the latest member of Xperia C and M families are priced higher than expected. The selfie-focused phablet C5 Ultra has been launched at Rs. 29,990, while Xperia M5 has been priced at higher Rs. 37,990. Both handsets are available for purchase online as well as offline!

In our opinion, Sony Xperia M5 and C5 Ultra are two classiest smartphones in mid-range market. They look incredibly stunning, but are extremely expensive compared to other mid-range handsets. Xperia M5 is packs more power, while C5 Ultra sits perfectly as an ideal phablet for big-screen lovers. They both serve well, but Sony has a lot to do for bringing them in right price category!

Could This Economic Recession Turn into Another Depression?

Why Is A Software Consultant So Important For Your Business?

Perks Of Hiring A Professional Website Design Service In Dubai