Tips for Developing Apps for BlackBerry PlayBookPosted by SuccessbloggerOn January 22, 2013 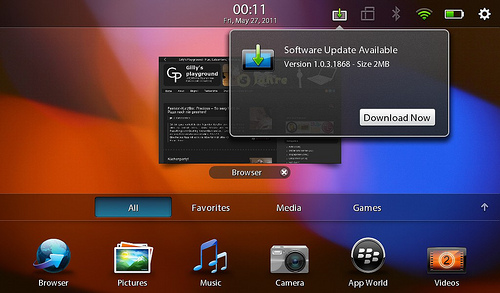 With the worldwide popularity of tablets exploding, app development is becoming an increasingly attractive option for millions of users and gadget fans, attracting both those seeking financial gain and those looking to express their creativity and enhance their skills. For a large proportion of these budding app developers, developing apps for the BlackBerry PlayBook is a particularly attractive option due to the wide variety of programming languages accepted by the tablet, with, for example, its ability to run flash having been noted in several BlackBerry PlayBook reviews, and a loyal, established customer base.

However, while there is a multitude of information online devoted to the technical process of app development, there is relatively little focused on the other parts of app development, namely coming up with an idea and getting the finished app accepted by the publisher (in this case Research in Motion (RIM), the makers of the PlayBook).

Coming up with a good idea is arguably the most important part of developing an app, as the best designed app in the world won’t sell if people have no need for it. For those having trouble, simply look at your tablet and think about what you want it to do that it can’t at the moment or what features could be improved or streamlined. In short, just have a think about how you use your tablet and come up with a couple of ways in which that experience could be made better. Having done this, go to BlackBerry App World, and check which of your ideas haven’t been done already. If they have been, then I’m afraid it’s back to the drawing board, unless if you can find a compelling way to differentiate your app to the extent that people will be willing to replace the rival app. There are, however, definite market opportunities available in the App World, as noted in The Verge’s BlackBerry PlayBook review.

So, now let’s say you’ve got an idea, and have got it working and ironed out all the bugs. Now, you obviously want to sell your app on BlackBerry App World, and that means you must submit your app to RIM for approval. While this may seem like a daunting prospect at first, the process is actually relatively simple and guidelines can be found under the developer section on the BlackBerry website. Most notably, there are various forms that need to be filled in and submitted if your app includes user-generated content, third-party content or performs any encryption method such as HTTPS or SSL. Also, you can only use RIM trademarks (such as the words BlackBerry and PlayBook) with RIM’s written permission, and you shouldn’t mention competing products or companies in your release description. There is also a rule that forbids your app name starting with the name of another company, as this implies an association between the app and the company (so, for example, Facebook Chat would be rejected, but Chat for FaceBook would be ok).

Finally, would be app-developers should also make sure their app does not include pornographic material, or material that could be considered offensive or racist, as these are both common reasons for apps to be rejected.

Stay within these guidelines though, and you should be well on the way to having your very own BlackBerry app.

Choosing The Right Blinds – A Handy Guide To Buyers

How To Spend Less During Your Studies