What Is Hard Disk Defragmentation?Posted by Gabriel MOn May 18, 2013 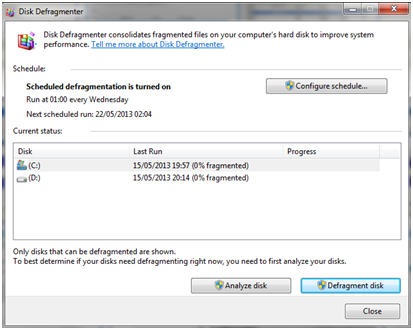 The word “defragmentation” is typically used to refer to a Microsoft Windows utility called Disk Defragmenter. It is designed to solve a problem that occurs because of the way hard disks store data.

An introduction to how hard drives work

If you want to have some knowledge about hard drives you should start by knowing these three things:

Because of the third of the above statements, it is optimum to minimize the number of rotations of a hard drive. This is possible if data is stored in sequential segments on the disk. Consider the following scenario. You just installed a new application on a blank hard disk. Since the disk is empty, the computer can store application files in sequential sectors on sequential rings. This is an effective way to place data on a hard disk.

When doing this on a disk that is not empty, storing data efficiently becomes more difficult. When loading a new application or a large file on disk, it ends up being stored in hundreds or thousands of scattered areas on the disc. When the computer tries to load the scattered pieces, the disk arm must move all over and this will take very long.

What does Disk Defragmenter do?

The idea behind the disk defragmenter is to move all files into as few sectors as possible, so that each file is stored on sequential sectors on sequential rings of the disk. In addition, a good defragmenter may also try to optimize things further. Defragmenting can significantly increase the speed of loading files. On a new disk that has never been filled or had an insignificant number of deleted files, it will have almost no effect because everything is already stored sequentially. As one might imagine, the process of moving thousands of individual files on a relatively slow hard disk is not a quick process and normally it takes hours. The following is a screenshot the Disk Defragmenter tool in Windows 7:

In order for the tool to run properly you must ensure that you have no applications currently running. Usually the Systray and Explorer processes are the only ones needed to run this application. You can display active applications using Ctrl + Alt + Del and selecting Task Manager. Defragmenting can take a considerable amount of time to run properly, so start the tool in a moment when you are not planning to use your computer for a while.

5 Ways Businesses Can Save Money By Using VoIP

3 Android Launchers You Must Try