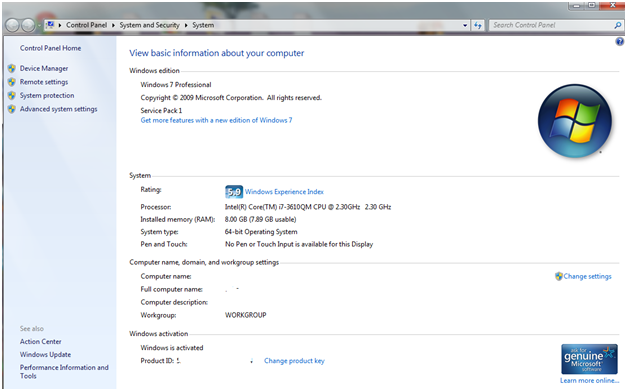 Almost everyone has heard of operating systems on 32-bit and 64-bit, but it is not always clear which operating system is more suitable for the computer we use. If you’re wondering what version of Windows is the most suitable for you, 32 or 64 bits, then this article will help you decide.

More and more users have already installed the 64-bit versions of the operating system without having a clear idea about what they made this choice. If you bought a new system with Windows pre-installed, you can easily find which version is installed. In Windows 7 click Start and write System. The window that opens contains the information requested and is similar to the one below:

One of the first aspects that need to be considered before choosing an operating system is whether the system it will be installed on has a 64-bit processor. Most of the new systems contain compatible processors, but there are still cheap systems that are not compatible with 64-bit operating systems. Operating systems on 32 bits cannot use more than 4096 MB RAM (4 GB). Any program installed on Windows receives a maximum of 4 GB of virtual memory to run.

This limitation of access to RAM is not just an issue for the programs installed, but also for the hardware installed on the system. During their operation, because of the limited amount of memory available, the components of the operating system lack a certain amount of memory.

One of the most common questions is whether 32-bit applications can run on 64-bit Windows. Fortunately, Windows systems on 64 bits contains a compatibility mode for these applications, called WOW64, which switches the CPU to the operating mode for 32-bit. Therefore, most applications designed for 32-bit systems will run normally, without any issues.

Finally, some people believe that since 64 is twice the value of 32, 64-bit systems will use double the amount of RAM. It is true that the operating system 64-bit requires more RAM memory, but definitely not twice as much. The extra requirements are mainly there because, in addition to the operating system itself, the WOW package compatibility is also needed.

How Hard Is It To Manage A VPS?

What are best ways to implement your financial circumstances to be rich?