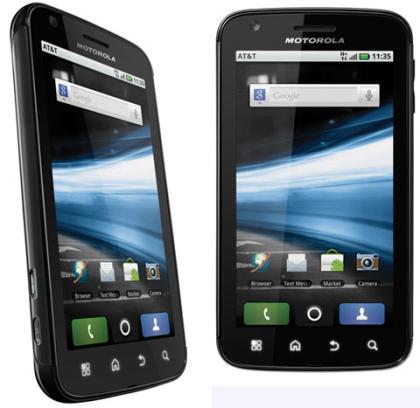 The Atrix 4G is not just a simple phone. The dual-core handheld works as a laptop, desktop computer, set top box, and somewhere between all these, it works as a smartphone too. The Motorola device, with its 4-inch screen, HSPA+ connectivity and other killer features, is multi-purpose device meant to substitute your netbook or more, through its Webtop environment.

The Motorola Atrix 4G’s hardware is admirable for a number of reasons, one of which is design. The chassis is mainly plastic but it’s packed firmly that it feels much more solid. Its dimensions are 4.63 x 2.5 x 0.43, thickness that is similar to that of the iPhone 4, and weighs 135g (4.8oz).the front is almost completely display, except for the Android buttons at the bottom. At the top rear is the power/sleep button, which is also a fingerprint scanner, and the headphones jack is next to it. On the right edge is the volume rocker and on the left edge are HDMI and microUSB ports. The fingerprint option is quite unique but if you don’t need high level security, a simple passcode will be enough.

The Motorola Atrix 4G is one of the best looking smartphones on the market and the looks are paired with some respectable power – 1GHz dual-core CPU, 1GB DDR2 RAM, 16GB internal memory plus a microSD card slot for extra 32GB. The device is also equipped with 960 x 540 capacitive touchscreen  that  Motorola calls qHD display. In the connectivity section, Atrix 4G offers Bluetooth 2.1+EDR, Wi-Fi b/g/n, and HSPA+. The phone has also a built in light sensor, compass and accelerometer.

The Atrix 4G is one of the fastest phones, competitive even to the iPhone 4. It can’t be thrown out of balance even by complex tasks like 3D gaming.

The cameras completely match the quality if the rest of the phone. The still images are clear and with realistic colors, and the 5MP camera also allows for 720p HD videos to be captured. The quality of the sound meets the quality requirements that we set when it comes to Motorola phones. Both the earpiece and the speaker on the back deliver a loud and clear sound.

The battery is packed with remarkable 1930mAh and even though Android tends to drain the battery very quickly, you can get more than 24h of constant heavy usage with just one charge.

For the Atrix 4G, Motorola decided to go with modified Android 2.2 Froyo instead of Gingerbread. It might sound like Atrix 4G is going retro on us, but it works very well actually, and no one says you can’t update to Gingerbread latter on. There are a number of proprietary apps of Motorola and AT&T that consume too many resources for other, more useful apps could be used. Some of these apps can be uninstalled, however.

Now, here’s where things get interesting. Motorola Atrix 4G comes with a software called Webtop that allows you to plug the Atrix into a laptop or desktop dock and set up an environment in which you see the phone’s window along with the Webtop software on the big screen.  Even further, you can have a Motorola laptop dock that looks like it just came out of a geek’s wet dream. It’s an 11.5-inch vessel for the Atrix 4G with 1366 x 768 resolution, full keyboard and trackpad with two buttons. Of course, the laptop doesn’t work without the phone. Motorola also provides a desktop dock, keyboard and mouse.

Even though Atrix has 4G as a core of its name, it fails to live up to the expectations. Both the download and the upload speeds are not 4G-like and the average download speed is 1.5Mbps. Perhaps the problem is in the network and not the phone, but still it’s frustrating.

The Atrix 4G will cost you $199.99, accessories not included. But with all the fire power and looks this phone has to offer, the only thing you should ask yourself is which of the accessories should you by.

Things To Avoid When You Are Designing Mobile Apps

Why You Should Move Your Disaster Recovery to the Cloud