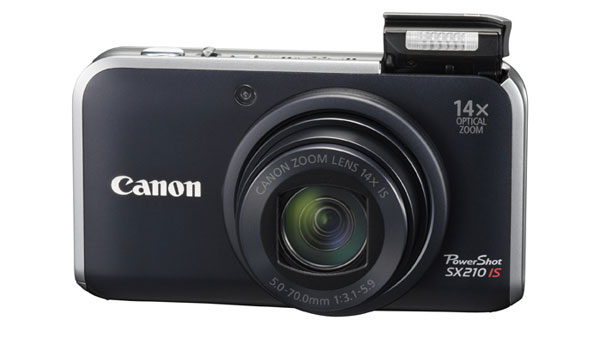 Canon cameras are some of the most popular on the market, and for good reason. Canon usually provides a good product at an affordable price. One well-known Canon camera out on the market right now is the $349.99 PowerShot SX210 IS.

The SX210 packs 14.1-megapixel power into a body 1.25 inches thick. The camera weighs no more than 7.4 ounces. Customers choose among purple, black or gold as the color of the shell. Although other cameras exist in smaller sizes which might weigh less, for a small point-and-shoot, the Canon SX210 offers good quality in a convenient shape.

The 14x optical zoom allows users to spy on the action from afar. The photo appears on the 3-inch LCD screen. Now, this is where the SX210 falls short of expectations, because although the view screen shows almost no motion blur, the fact that it has a 16:9 aspect ratio results in black bars bordering images of a 4:3 aspect ratio. However, the SX210 recuperates some of its esteem thanks to the fact that the LCD backlight makes the images seeable even in direct sunlight.

The photos appear crisp on the screen, but if you look closely at the digital display, the colors tend to fringe where there’s a strong contrast between them. There are other cameras out there that are able to correct the problem, so it makes you wonder why this default exists.

Another pro of the SX210 is its interface. Canon is a well-known provider of user-friendly interfaces, and it lives up to that reputation with this camera. There’s an automatic shooting mode, but the scroll wheel on the side of the casing lets you choose between 13 other modes. You can also directly adjust the aperture and shutter speed. One downfall of this device is that in low light, it is necessary to use the flash, so don’t expect the best nighttime photos.

As for audio and video recording, the usability of the SX210 is sufficient if you don’t require professional standards. The audio recording is good, since its two microphones function with stereo audio recording. The video takes at 30 frames per second and stores them as QuickTime files, which mean the format is already set for quick internet uploads.

Many cameras offer few additional external ports. That’s not the case with the SX210. There’s a mini-HDMI port on the camera, which allows users to connect to an HD TV. This is a great feature if a user needs to conduct a quick slideshow presentation.

The camera takes fast shots, but the wait time in between is a bit longer than average. Overall, the Canon PowerShot SX210 offers standard quality usability and easy, clean functionality.

How To Turn Your Gaming Passion Into Profit