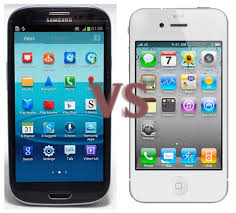 Since iPhone 6 hasn’t been released yet, rumors believe it will be almost identical to the iPhone 5 so in comparison we’re breaking down the IPhone5 and the Samsung S III Smartphones and see which is better and why.

IPhone 5 offers a slim aluminium back cover with a non-removable battery and a fingerprint and oil resistant screen (front cover.) Dimensions are: 128.8 mm height, 58.6 mm width and 7.6 mm thickness.

Depending on if you want a slender phone, or a larger phone, both sizes offer a good fit to users.

IPhone offers a 4 inch IPS screen with 1136 x 640 res (306 dpi.) In the dark you are supplied with maximum brightness and a less reflective screen surface

IPhone 5 uses iOS 6 which has had its growing pains and needed updating shortly after release. Samsung uses the android 4.1 Jelly Bean a standardize operating system that has had the quirks taken care of before release.

With the IPhone 5, Apple chose to not use Google maps, but went with Apple Maps; which is fraught with errors. However Google maps can be easily downloaded for IPhone users.Samsung went with standardized Google maps instead of using an unproven map app.Points go to Samsung on software.

With so many options of colours, the IPhone 5 is still only available in black and white, but Samsung Galaxy SIII ha six colours to choose from.Points go to Samsung for options.

IPhone 5 has the standard applications that are expected from smartphones, plus a few notable ones; Siri, Safari, iSight camera, iCloud and Passbook. While these are some unique features, they just don’t answer to the IPhone’s fans for wanting new and better features and applications.

Apple’s IPhone appears to be stuck in rut software wise. Users were expecting more of a bang for their buck with the IPhone 5, unfortunately it didn’t deliver with the IPhone 5 and speculation is that there won’t be much marked improvement in the new IPhone 6. IPhone autonomy has been totally usurped by the Samsung Galaxy S III, and it is unsure whether Apple will change direction with the IPhone and be able to regain its leadership in the smartphone market.

Liza John is an IT professional from Selftesttraining .Have you really looked for this selftesttraining.com Assistance? Move ahead to take the benefit of ASQ Certifications and pass your exam easily.

The Benefits Of The Public Cloud In Enterprise

The Pros & Cons Of A Tablet Computer PC