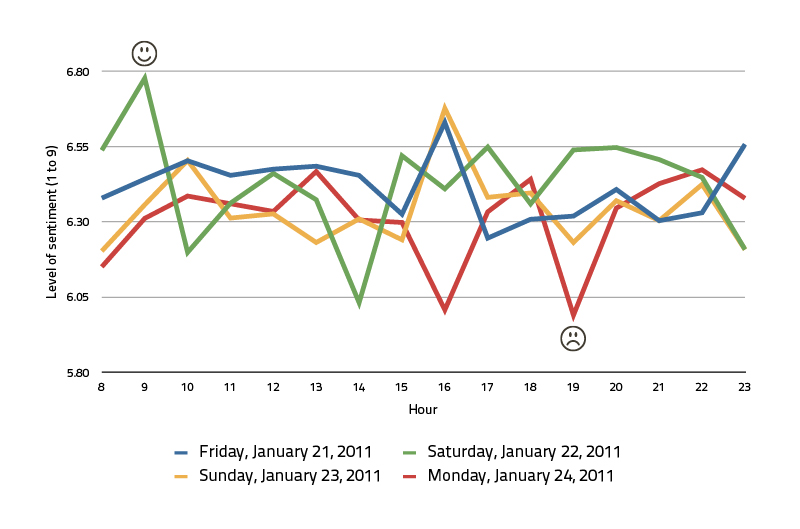 If you’re running a small business, then you probably don’t have a problem keeping up with your Twitter account. Large companies, on the other hand, receive volumes of social media coverage. According to Burson-Marsteller, Fortune 100 companies are mentioned an average of 55,790 times per month on Twitter.

Marketing departments take a strong interest in measuring their brands’ “Twitter temperature,” so they turn to automated sentiment detection programs. Instead of reading through all of their tweets and mentions the way that a small business owner might do, a marketing professional may activate an automated sentiment detection program and look at a graph. That graph would indicate how many of those 55,790 tweets were positive and how many were negative. The tool would be particularly useful when the company rolled out a new promotion or product.

If your company is mentioned in over 50,000 tweets per month, your customer service team will never have the kind of manpower to manually sift through those tweets. Automated tools deliver a much-needed shortcut through the data. When you’re using them or training your staff to use them, keep these guidelines in mind:

Automated sentiment detection tools are useful, but they can’t replace one-on-one customer interaction. If your team is unsure whether “Thanks for the great customer service!” is kindly meant or sarcastic, then take the time to reach out to the person that sent the tweet. Your appreciation can turn a positive tweeter into a brand evangelist. Likewise, your conscientiousness can stop negativity before it gets out of control.

About the Author: Leah Capistrati provides social media marketing consulting services to a range of companies from small businesses to large enterprises.

Why are Helmet Cameras Useful?

Are You Using Rings For Slew Bearing Correctly?