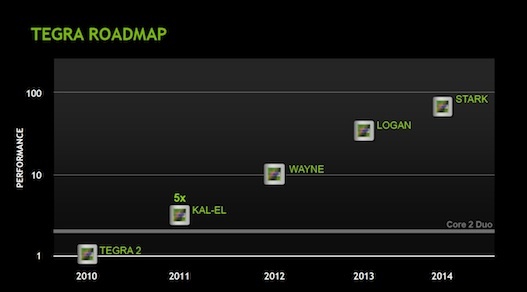 Nvidia today announced the first quad-core processor for tablets and mobiles, the Kal-El chipset. Nvidia has also unveiled an ambitious array of chip sets following the Kal-El. They include Wayne,Logan and Stark- all with more than cent percent processing power than the current Tegra-2 based chip sets.All the future chip sets will have their release by 2014.

The new Kal-El chipset delivers better performance and runs on all mobile platforms. With over five times the graphic performance of Tegra 2, it has the ability to drive 2560 by 1600 monitors. The Kal-El can enable a 10 inch tablet to function as a retina tablet with its high resolution capacity. Even with all this, the power used up by the chipset is lower than that by the Tegra-2.

The Quad-core chipset will increase browsing speed as was proved at the demo. Together, the chip played a 1440p video and the game demos had almost double the frame rate as the Tegra-2. The Kal-El will appear in tablets by coming August to be followed closely by the mobile units.

A Few Tips For Woman’s Health