Do you remember those giant, wheezing printer toners which we used to use in offices a few years back? To be fair I had completely forgotten about then until I recently made a trip across to South America. 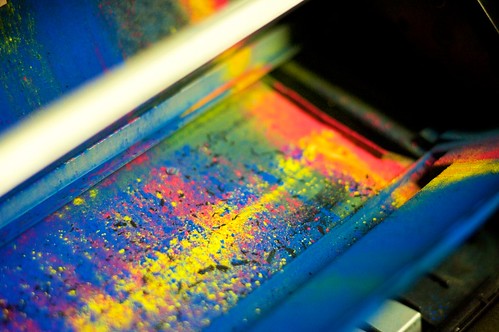 copier, so there are lots of little shops where you can go in get your papers copied. I was amazed to see so many of these shops and wondered who on Earth kept them in business, as I for one had never felt the urge to get papers photocopied in a shop.

My opinion changed though when I was told by the migration office that I needed to fill in a form for my new visa, photocopy it three times and then basically get three copies of every single piece of paper which I owned. I finally entered into one of these copy shops and it was like stepping into a time machine.

The giant, clunky copiers which they still use are very like the ones I used to have to fight with every day in some of my old jobs. I especially remember one which chewed up every second piece of paper and had to be opened up at least 20 times a day to try and get out the trapped scraps, the brother toner cartridges used were the size of my forearm.

Anyway, I mention this now because it got me thinking about the amazing advances we have seen in the printing industry in recent years. Now a lot of us have cool, miniature printers which we use at home and in a lot of cases these can also act as a scanner as well as having some other functions.

These little beauties give us a top class print quality in an extremely small and attractive package, which is a million miles away from those big, awkward machines we used to use. So what other advances can we expect to see in the future?

This amazing sounding technology has actually been around for some time but it is only now that there is the serious possibility of it becoming something which could be affordable for domestic or small business use. There are lots of potential scientific and medical uses for it too, and it is definitely something we can expect to hear a lot about it in the future.

This is another piece of printing technology which exists but which has still to become affordable and accessible for all of us. We will no doubt hear more about inkless printing shortly, as some of the biggest names in the industry are currently working on solutions which will make the process of printing a bit less messy and, hopefully, less expensive in the long run too.

Turnkey Websites for Your Business