What Makes Windows 8 Themes Different?Posted by Gabriel MOn May 9, 2013

Windows 8 themes appear to be similar to those proposed by Windows 7, at least at first. The process of creating custom themes is the same in both operating systems but the themes files used in the two operating systems have a different extension and are not compatible with each other. So what is really happening? In this guide you will find out.

What is actually a Windows theme?

First of all, you will need to understand what a Windows theme really is, regardless of the version of the operating system used. As Microsoft defines them, themes are a combination of background wallpaper, window colors and sounds. This is correct, but this definition does not cover all the details. Therefore, here is a more detailed definition:

A theme for Windows could be defined as an archive with a specific file extension (.themepack in Windows 7 or .deskthemepack in Windows 8). Such an archive includes used Desktop wallpapers and default desktop icons (Computer, Network, Cart recycling, etc.), as well as visual styles applied to Windows and all desktop programs, including mouse cursor and the screensaver running when the computer is not used.

When you extract the contents of the Windows theme file, you will find a structure similar to the following: a folder called DesktopBackground including all Desktop wallpapers used and a file with the extension .theme. The following picture shows what you see if you open a theme file with a program such as WinRAR.

If you edit the .theme file, you will notice a structure that is similar to the one below: 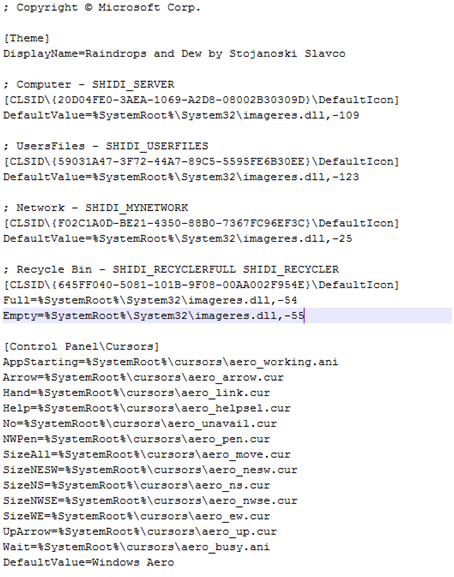 Windows themes that have the same setting should have the same dimensions. However, Windows 8 themes are generally smaller than the ones of Windows 7. When extracting the contents of themes and comparing the settings found in them, some important differences appear.
First, themes in Windows 8 use a field called ThemeID – an identifier such as those used in the system registry. Windows 7 themes do not use such identifiers. Next, the TileWallpaper and WallpaperStyle settings, which in Windows 7 were used to describe the position of your desktop wallpaper on the screen have completely disappeared in Windows 8.

Instead of this, some new theme settings appear in the new operating system: MultimonBackgrounds – used when you wallpaper is compatible with multiple monitor display, as well as PicturePosition which, most likely, replaces the position of Windows 7 settings mentioned earlier.

The third new setting is AutoColorization. This is another new feature of Windows 8 themes, which can change the colors applied to all windows on the screen depending on the predominant color of the active image in the background.

Bringing Back All The Faithful To The Righteous Path